To properly showcase their Rancho Cucamonga industrial space to potential tenants, Colliers International | Brookfield Properties hired Friedman Studios to produce a video tour. Friedman Studios created a complete Rancho Cucamonga virtual tour, with comprehensive packaged services. Now more than ever, buyers and renters alike utilize virtual tours of properties to choose where to buy and lease. Virtual tours offer added benefits, including being accessible to both those local and out of state. With unique properties in particular, video tours allow brokers to give the context of the site in addition to presenting the property highlights more efficiently.

With the 6th Street Rancho Cucamonga property, Friedman Studios faced the task of highlighting several key features of the property that make it stand out from other industrial sites. For example, the 6th Street logistics center offers a low coverage building with excess yard area, totaling ±4.55 acres. As such, Friedman Studios employed several different technologies to produce the comprehensive Rancho Cucamonga virtual tour. For instance, the packaged services Friedman Studios created included video, both ground and drone photography, and a 3D walk through. Shooting the footage while observing social distancing proved challenging. Friedman Studios not only captured all footage, but did so in a quick turn around time. Friedman Studios focused on the context of the site when formatting their virtual tour. To do so, Friedman Studios utilized animated maps to showcase the property’s highly-desired “bullseye” West IE location. The virtual tour demonstrates the property’s direct access to several major freeways. Then the maps show the distance to local major airports. In addition, the map animations depict the nearby logistical airports as well as the short distance from intermodal yards. Further, Friedman Studios produced animated maps to highlight the distance to both the Port of Los Angeles and the Port of Long Beach. The virtual tour then notes the property’s corporate neighbors, including General Motors and Exel.

The Rancho Cucamonga virtual tour then pivots to shots of the property. The exterior film highlights the vastness of the ±4.55 acres and the interior footage shows the ±8,888 SF of interior space, emphasizing the ±2,500 SF of newly refinished office space. Further, Friedman Studios capitalized on aerial footage to capture the concrete and asphalt yard fully secured by an 8′ blocked wall.

The virtual tour concludes with aerial images to showcase the property’s key features. For example, the video shows the four dock positions as well as the newly refinished warehouse/shop space. 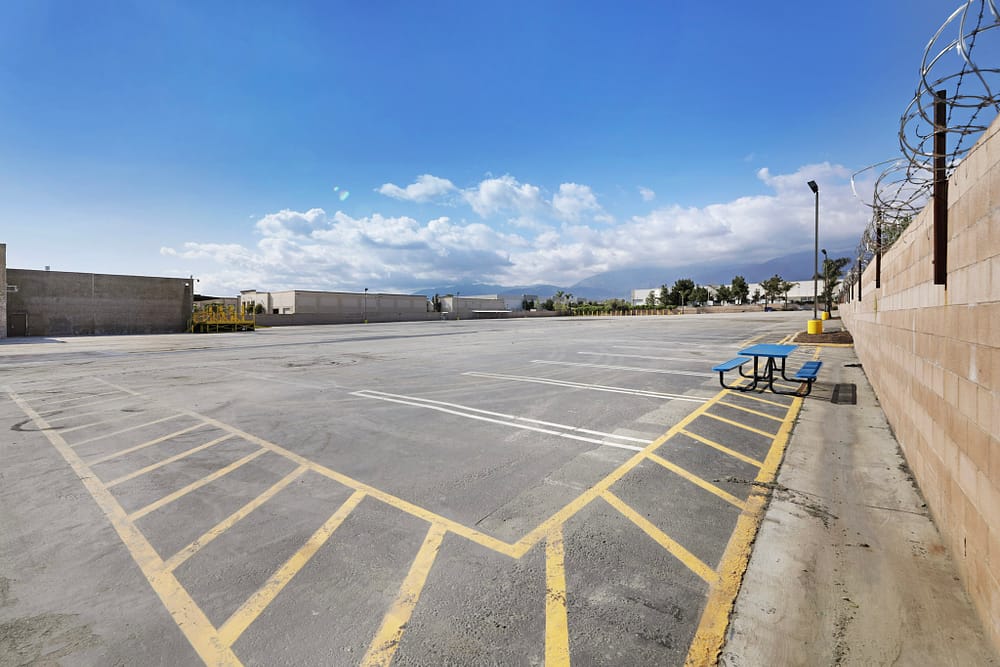 Virtual tours offer many advantages. In the case of the 6th Street property, the aerial and drone footage as well as the inclusion of animated maps gave a unique perspective of the property. The 3D walk-through Friedman Studios created allows prospective tenants to tour the property while observing social distancing recommendations. In sum, the virtual tour, especially when coupled with the 3D tour, gives prospective tenants a complete understanding of the property. In-person tours alone cannot offer the same context.